Last Seen: new campaign to curb texting behind the wheel

BEIRUT: Road safety NGO Kunhadi has teamed up with Lebanon’s leading telecommunications company Alfa to launch an advertising campaign to educate drivers on the dangers of texting while driving.

“This is the second year we’re doing a campaign with Kunhadi and since then we’ve been open to any suggestions and we stand next to them to support them financially,” Marwan Hayek, Chairman and CEO, of Alfa told The Daily Star during a news conference Wednesday.

The campaign - created by M&C Saatchi advertising company – will be a play on the ‘Last Seen’ feature of the popular messaging application WhatsApp. The feature lets users know when their contacts were last online, indicating whether or not they have read their messages.

The ad will show a WhatsApp screen with the user’s status as ‘Online’ and a change to ‘Last Seen’, implying that they’ve crashed. It will roll out on television, radio and billboard and LED screens.

Driving infractions are a common occurrence on Beirut’s traffic congested streets. Despite the fact that it’s illegal to use one’s phone while driving, most drivers can be seen messaging, calling or simply browsing the internet while driving around Lebanon’s capital.

WhatsApp in particular is extremely popular, accounting for 12% of all of Alfa’s data traffic last month. Persuading users to cut down may be a difficult task.

“We are trying to convince people through education,” said Fady Gebran, the President of Kunhadi.

Gebran, a former banker, started Kunhadi in 2006 after losing his son to a car accident. His tragic death was the result of driving late night after being out at a nightclub with friends, since then his family and friends have dedicated their time to raising awareness about road safety in Lebanon.

The name itself translates to ‘Be Calm’ (kun hadi) and Hady is also the name of Gebran’s deceased son.

“One of his friends came up with the idea to start an association,” Gebran said, “but we couldn’t find a name so I went to [Hady’s mum] and she told me it’s easy, kun hadi.”

This is the second campaign that Kunhadi and Alfa have teamed up for following last year’s “In the Car, a Call is Very Costly” campaign.

Speaking on the success of the previous campaign, Hayek said it was difficult to assess the impact that the campaign had but noted that there had been a 3% decrease in accidents.

“If it is due to our campaign, that is something that we’re not really sure of at this stage,” Hayek confessed.

The statistics do paint a muddled picture. Numbers from the Internal Security Force (ISF) indicate that accidents did drop 3% - going form 4804 in 2012 to 4675 in 2013 – but the percentage of those accidents caused by ‘distraction’ remained relatively stable; actually rising slightly from 19.96% to 20.58%. 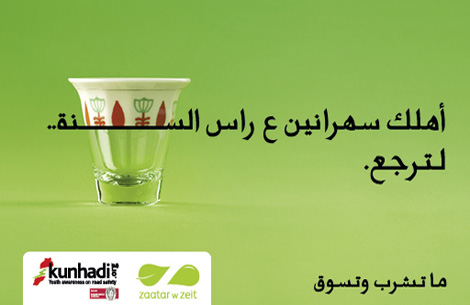